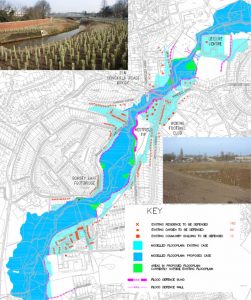 Water Environment Limited was engaged as a specialist sub-consultant for the design of a 4km flood defence scheme in Woking. The client was Woking Borough Council with an overall project budget of £60Million of which flood risk related components amount to approximately £18Million. The Westfield area in Woking has flooded severely several times from the Hoe Stream in the last 50 years and there was considerable pressure on the Borough to provide flood defences to alleviate the problem. 200+ existing properties will ultimately benefit from the scheme as well as an additional 150 new homes. The scheme evolved over a period of 4 years and key personnel listed were involved throughout this period including extensive hydraulic modelling and the appraisal of various options. The proposals were scrutinised by the Environment Agency on a variety of levels who ultimately become co-funders of the project with Woking Borough Council.

We represented Woking Borough Council publicly on many occasions, including public exhibitions and discussions with key stakeholders, land owners and concerned citizens of the borough. Much of this work was in pursuit of good public relations for the borough, vital to the implementation of the project. As the site is designed to be a linear public park, a key aspect of the project was a close working relationship with the landscape architects in order to integrate the working aspects of the flood defence scheme (channel improvements, diversions, bridges, bunds, walls and storage areas) into the park. The objective was to make the flood defence scheme an inconspicuous feature of the landscape design and to enhance the public amenity.

We played an active role in the discussions with various prospective benefactors in an effort to raise money to subsidise the scheme, with presentations to key stakeholders on behalf of Woking Borough Council, explaining the benefits of the scheme to each one. As a result, we helped to raise a substantial contribution to the scheme.

Wherever possible we investigated and specified the appropriate use of sustainable materials and techniques with colleagues from other disciplines. These include the reuse of treated tip material in the construction of the flood defence bunds to minimise the movement of large volumes of material, the recycling of aggregate from existing structures for the construction of new bridge structures, as well as sustainable urban drainage systems such as permeable paving, low-flow taps, rainwater harvesting, reed-bed treatment of effluent . This was a large project which was technically challenging and required an appreciation of the requirements of other construction disciplines, as well as the particular needs and political pressures of a borough council. It stands as testimony to a long-term healthy relationships forged between Water Environment Limited personnel and Woking Borough Council over many years.